The only national standard for utilization voltage regulation is ANSI C84.1. Its title is American National Standard for Electric Power Systems and Equipment – Voltage Ratings (60 Hertz). The first version in 1954 was a combination of two standards, one from the Edison Electric Institute that represents utilities and the second from NEMA that stands for National Electrical Manufacturers Association. It establishes nominal voltage ratings for utilities to regulate the service delivery and it establishes operating tolerances at the point of use. The design and operation of power systems and the design of equipment to be supplied from such systems should be coordinated with respect to these voltages. In doing so, the equipment will perform satisfactorily in conformance with product standards throughout the range of actual utilization voltages that will be encountered on the system. These limits shall apply to sustained voltage levels and not to momentary voltage excursions that may occur from such causes as switching operations, fault clearing, motor starting currents, and the like.

To further this objective, this standard establishes, for each nominal system voltage, two ranges for service voltage and utilization voltage variations, designated as Range A and Range B, the limits of which are illustrated in figure 1 based on a 120 volt nominal system.

For range A, the occurrence of service voltages outside of these limits should be infrequent. Utilization equipment shall be designed and rated to give fully satisfactory performance throughout this range (A). Range B includes voltages above and below Range A limits that necessarily result from practical design and operating conditions on supply or user systems, or both. Although such conditions are a part of practical operations, they shall be limited in extent, frequency, and duration. When they occur, on a sustained basis, corrective measures shall be undertaken within a reasonable time to improve voltages to meet Range A requirements.

Insofar as practicable, utilization equipment shall be designed to give acceptable performance in the extremes of the range of utilization voltages, although not necessarily as good performance as in Range A.

It should be recognized that because of conditions beyond the control of the supplier or user, or both, there will be infrequent and limited periods when sustained voltages outside Range B limits will occur. Utilization equipment may not operate satisfactorily under these conditions, and protective devices may operate to protect the equipment.

ANSI C84 does not explain that typically, the nameplate nominal voltage is not the same as the utility nominal voltage. Refer to table 1. ANSI C84 also does not explain that in general, NEMA, National Electrical Manufacturers Association recommends that all electrical appliances and motors should operate at nameplate plus or minus 10% satisfactorily, however not necessarily at an optimum condition. The reason that the nameplate nominal is lower than the service entrance voltage is the acknowledgment that there will be a voltage drop within the electrical distribution system of the end users premise. The National Electrical Code allows up to a 5% drop. There can be a <3% drop in a feeder and an additional <3% drop in individual branch circuits.

Utilities actively regulate distribution voltages slowly by means of tap changing regulators and by switching capacitors to follow changes in load. These voltage changes are small incremental steps necessary to keep the service delivery voltage within an acceptable range as customers add and subtract load during the day. This slow regulation maintains a sustained voltage range. Sustained usually means a period greater than two minutes.

The reason for the CBEMA curve is for changes in voltage shorter than two minutes. As described above, there will be excursions outside the acceptable ranges for short “momentary” periods. 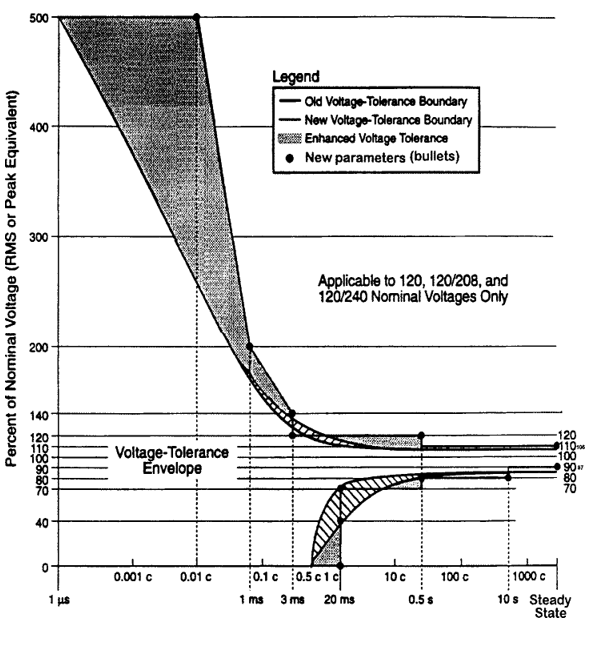 Duration of Disturbance in Cycles (c) and Seconds (s)

Computer and electronic equipment manufacturers usually specify maximum momentary voltage deviations within which their equipment can operate without sustaining errors or equipment damage. This curve shows an envelope of voltage tolerances that is representative of power-conscious computer and other electronic equipment manufacturers. The original CBEMA curve is referenced in ANSI/IEEE Std 446-1987, A Recommended Practice for Emergency and Standby Power Systems for Industrial and Commercial Applications. The CBEMA group has changed names to ITIC to represent a broader spectrum of the industry.

The wider tolerance curve was created in 1996 to indicate the improved ride through capability of power conscious manufacturers. The original CBEMA curve was established as a guideline for computers in data centers with extensive power quality mitigation measures in place such as motor-generator sets and isolation transformers. For equipment located outside this protected environment, there will be frequent events outside the curve.

Some power quality monitors now include the CBEMA/ITIC mask to provide a frame of reference when reviewing recorded events. The assumption is that events within the curve should not cause disruption or damage. Equipment experiencing problems will need some form of mitigation to isolate itself from the electrical distribution system. Before mitigating these disturbances, it is important to understand the equipment’s sensitivity level. There are no general equipment susceptibility standards for momentary voltage variations. For a general description of power quality issues and solutions there are three good publications. These are described at the end of this power note.

The microelectronics industry has produced two standards in view of the extremely high losses due to power variations in the manufacture of microelectronics; SEMI E10 Standard for Definition and Measurement of Equipment Reliability, Availability, and Maintainability; and SEMI F42 Test Method for Semiconductor Processing Equipment Voltage Sag Immunity. E10 defines the sag ride through capability. F42 defines the test methodology to confirm compliance to the standard.

These standards are available from Semiconductor Equipment and Materials International (SEMI), 805 East Middlefield Road, Mountain View, CA 94043. Their web address is www.semi.org. Basically, that industry has decided that if they properly define the problem and provide for a performance test procedure when purchasing new production equipment, they can reduce the number of nuisance tripping problems. An analysis of 30 monitor years of disturbance data collected at major semiconductor manufacturing sites revealed that 15.4% of the events were below the CBEMA 1996 tolerance curve. The average number of occurrences below the CBEMA 1996 curve per site per year was 5.4. The SEMI task force concluded that a higher standard was needed.

Duration of Voltage Sag in Seconds

Figure two is the approved SEMI E10 Voltage Sag Ride-Through standard. This was determined by statistical data analysis of the frequency and duration of sags and the cost to incorporate ride through mitigation. If you are interested in the development of the SEMI standard, there is a web site where it is spelled out in a document available to the public. The document’s name is Guide for the Design of Semiconductor Equipment to Meet Voltage Sag Immunity Standards. The web site address is www.semitech.org. It is classified as a Technology Transfer document #99063760A-TR. Figure three is an overlay of the CBEMA curves and the SEMI E10 curve. The principal improvement in the SEMI curve is lowering the sag ride through curve down to 50% of nominal for the first 200 milliseconds or about 12 cycles. Beyond 12 cycles, the SEMI curve mimics the new CBEMA curve. 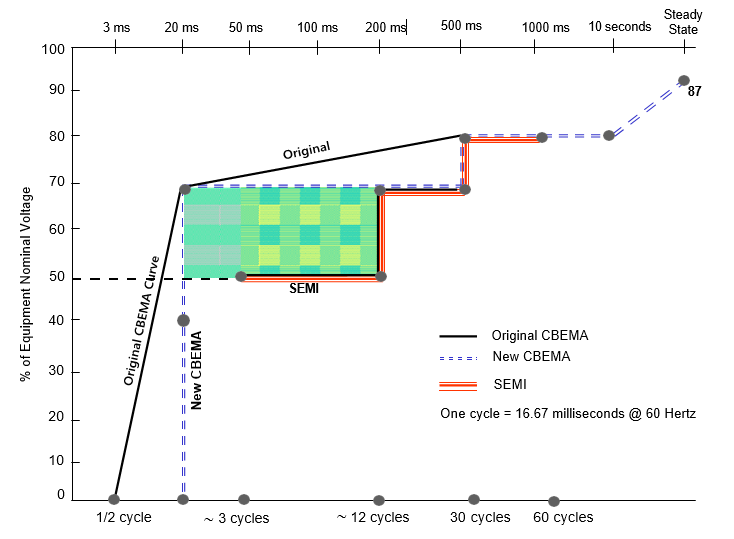 SEMI E10 sag ride through threshold only defined between 50 milliseconds and one second, (3 cycles–60 cycles). In practice, machine must ride through voltage sag down to 50% of nominal up to 12 cycles.

In a parallel development, an IEEE working group generally focusing on sag ride through issues, has produced a standard to analyze the economics of sag ride through mitigation, IEEE Standard 1346-1998, Recommended Practice for Evaluating Electric Power System Compatibility With Electronic Process Equipment. A standard methodology for the technical and financial analysis of voltage sag compatibility between process equipment and electric power systems is recommended. The methodology presented is intended to be used as a planning tool to quantify the voltage sag environment and process sensitivity. It shows how technical and financial alternatives can be evaluated. Unlike the SEMI standard above, this standard does not include performance standards.

IEEE 1100-1999. Recommended Practice for Powering and Grounding Electronic Equipment. Incompatibilities between power system characteristics and equipment tolerances have caused operating problems and loss of productivity in all kinds of power systems – putting facility engineers and system designers in the spotlight to provide effective and efficient solutions. A key element to formulating any solution is the cooperative effort, among power system designers, equipment manufacturers, and the electric utilities, to provide and maintain an acceptable level of load/source compatibility. This is also known as the Emerald Book.

IEEE 446-1995. Recommended Practice for Emergency and Standby Power Systems for Industrial and Commercial Applications. The Orange Book presents the recommended engineering practices for the selection and application of emergency and standby power systems. It provides commercial/industrial facility designers, operators, and owners with guidelines for assuring uninterrupted power. Users in the areas of industrial process operations, medical facilities, and solid-state and computer installations will find the help they need in meeting the demand for uninterrupted power, virtually free of frequency excursions and voltage dips, surges, and transients.