The subject company manufactures meat products such as sausage, salami, and bologna. Most of their load consists of HVAC and refrigeration as they have about 6000 sq. ft. of cold room storage. They also have machinery such as grinders, slicers, and presses. The facility is served by a 120/240V through a utility-owned 500 kVA High-Leg Delta transformer that they share with another factory.

Interruptions occurred when a main 1200 amps circuit breaker was tripped frequently. The events occurred often and sometimes several times a day. Previous measurements had not shown the reason for the events as the highest measurement of current shown was 760 amps, which was not enough to cause the breaker to trip.

From the recordings, the following was noted:

At times the peak current exceeded the 1200A breaker rating without tripping the breaker. An interruption that was tied to such a peak current was detected only once during the measurement period. Further investigation from the wave forms captured determined that the voltages were distorted during such times. This distortion caused nuisance tripping of other breakers and caused the capacitor banks to fry.
A long-term measurement showed that the capacity of the breaker could be reached when a combination of tasks occurred at the same time.
Since most of the load at this site is linear, no harmonics are generated from within the facility. When we looked outside the factory, the cause of the distortion was traced to faulty power transformer. 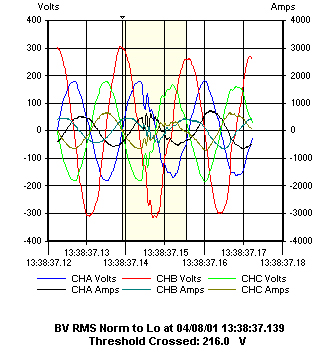 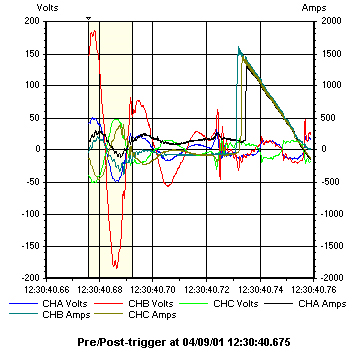 The utility replaced the transformer and enabled the factory to increase capacity and production.